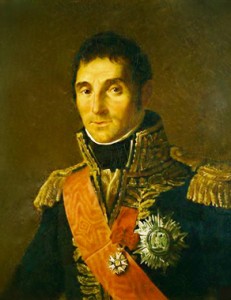 Marshal André Masséna, duc de Rivolii, prince d’Essling (1758- 1817), was one of the most successful and victorious commanders of Napoleon’s army.  He earned his reputation as a very effective and dedicated divisional commander in Italy.  He played a primary role in Napoleon’s greatest battles, Lodi, Castiglione, Bassano, Arcola, and Rivoli, driving the Austrians out of Italy in 1797.  In 1799 his crucial victory over the Austro-Russian armies at Zurich saved France and the achievements of the Revolution from imminent invasion and destruction.  His remarkable defense at the siege of Genoa contributed directly to Napoleon’s victory at Marengo.

In 1805, Masséna commanded the French army in Italy and played the major diversionary role that insured Napoleon’s victory at Austerlitz.  In 1809 during the War of the Fourth Coalition, his corps was crucial at Aspern-Essling to insure the survival of Napoleon’s army.  The next month he played an essential role in gaining the victory at Wagram and ending the war.  In 1810, with French forces in the Iberian Peninsula under constant threat, Masséna reluctantly accepted command of an army destined to confront the victorious Duke of Wellington and the Portuguese people.  Without adequate resources or support, he was ultimately recalled to France where he ended his illustrious career.  In the final analysis, Napoleon recognized him as “the greatest military name of my Empire.”